With this special page we would like to take you on a journey through our tradition-rich history and make it more touchable for you. Besides that, we love to take you with us into the present and inspire you with stories about the company ERHARD, its employees and values. During the whole year, we will provide you with information about the various activities in our anniversary year - be curious!

„Johann Erhardt, bladesmith, announced that he had started his business.“

A 150-year success story begins on 28 August 1871 with an unassuming notice among the Heidenheim business ads..

After spending several years travelling, the young master craftsman (who still occasionally writes his name with "dt" during this time) returns to his home town. Here he starts his own business, with a modest beginning in his father's workshop.

Initially, Erhard makes small knives and blades from scrap metal. Frugality and diligence are the most important virtues for him and his wife Christiane. When asked where the young couple spent their honeymoon after their wedding in 1875, Christiane Erhard is said to have replied: "Honeymoon? The day after the wedding I was helping my husband with metalworking."

All the while, the company founder is also looking beyond the confines of the workshop. In the middle of the Gründerzeit period, industrialisation is in full swing in Germany, and water works and water pipes are being built in many locations. Erhard recognises a growth market here: the bladesmith becomes a manufacturer of taps and valves. 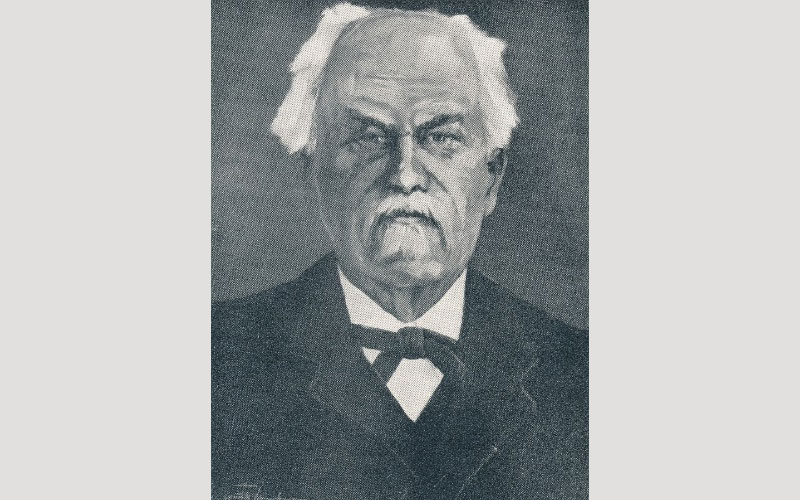 After spending several years travelling, the 26-year-old brass founder Johannes Erhard sets up his own business in his home town of Heidenheim. His workshop at Wedelgraben produces all kinds of goods made of metal and brass, which Erhard himself packs into a rucksack and sells in the surrounding towns. 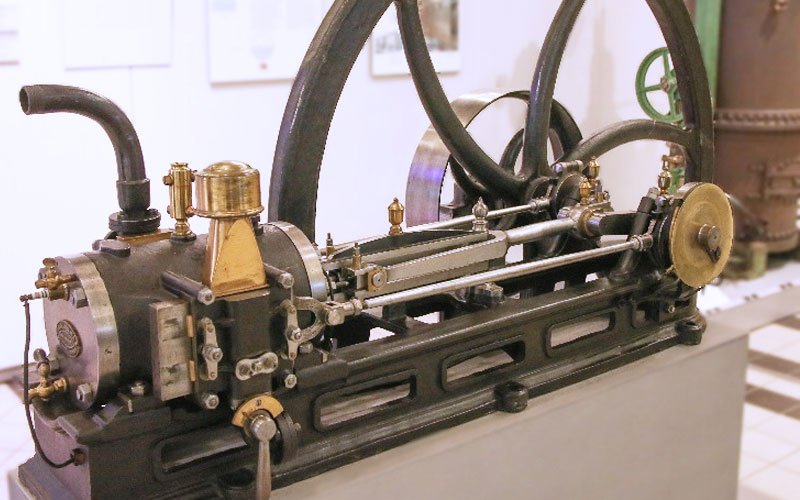 Modern gas engine, as also used at ERHARD around 1900.

ERHARD's business model takes shape: water works and water pipes are being built all over the Württemberg region, meaning that valves and taps are also needed. The company already has over 20 employees, Johannes Erhard is expanding and acquiring new equipment, including a 2 hp gas engine. 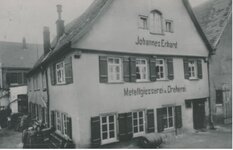 The "first" ERHARD site in front of Meeboldstraße, the workshop on Wedelgraben, remains after 1913.

Johannes Erhard and his wife Christiane have no children. They take on Christiane's nephew Josef Waldenmaier, who takes over the running of the company in 1904. Under his management, ERHARD transforms from a trades firm to an industrial company. In 1913, the location in Meeboldstraße is built. 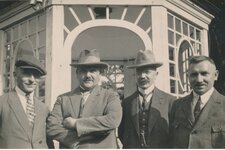 ERHARD now has more than 400 employees and it can get quite hectic in the production department. Nevertheless, Josef Waldenmaier continues to subscribe to the quiet and modest manner of the company founder and is close to his employees. They say about him: "He talks like me, he eats like me, he complains like me" 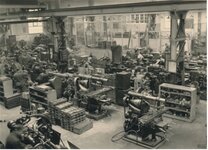 Josef Waldenmaier's son Erhard takes over the company after his father's death. It is a challenging legacy: ERHARD is heavily impacted by the world economic crisis of the previous years, and in Germany the National Socialists are now in power. ERHARD is incorporated into the system of forced labourers and arms production.

The end of the Second World War is a difficult new start for ERHARD. The firm needed to shift from wartime to peacetime production operations. At the same time, the company wants to re-establish its international connections made before the Nazi era. The turnaround is a success: ERHARD is soon once again exporting its valves all over the world and even has exclusive supply contracts with the USSR.

You can guess what is at the top left of the picture: the Oettinger plant behind the swimming pool.

Foundry workers in swimming trunks – construction of the new plant in Oettingen begins in 1960, equipped with a new foundry and a fully automatic machine line. ERHARD also builds a new swimming pool next to the factory site, which is available to all Oettingen residents. 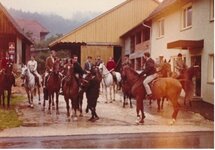 In addition to expanding production facilities and sites, ERHARD also provides the leisure activities for its employees. There are various sports groups, an aikido course and even an Erhard riding group. 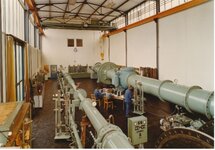 Insight into the testing facility, 1976.

The death of Heinz Waldenmaier marks the next change of generation: Ingrid Waldenmaier takes over the firm. At the same time, the company struggles with a fluctuating economy in the coming years. However, this does not prevent ERHARD from constantly devising new custom designs for its customers in its own testing facility.

Despite a changing market, ERHARD continues to produce custom-made products, such as the one shown here for a lock in Cyprus, ca. 1990.

After the opening of the Eastern Bloc, international competition increases and sales markets disappear. During this period, the entire industry is in upheaval. At the end of 1998, a new conglomerate of the largest manufacturers in the valves industry, Deutsche Armaturen AG is formed under Mannesmann AG, including ERHARD. 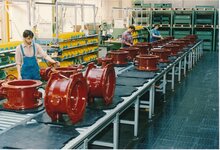 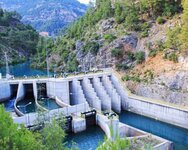 ERHARD receives its second largest order in the company's history with the water supply project in Ankara. 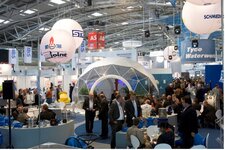 The "door-to-door sales" of Johannes Erhard's early days is long gone. However, direct exchange with partners and customers is still just as important for ERHARD, and the company attends numerous trade fairs. 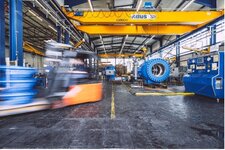 ERHARD still maintains the craftsmanship from its roots, only the machines have changed.

Formation of TALIS in Heidenheim, including ERHARD: The new company is also guided by the values that have been followed at ERHARD for over 100 years. The ERHARD team continues to produce high-quality valves and export them to the rest of the world. 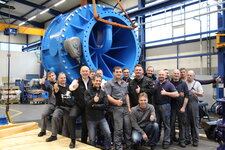 Both in Waldenmaier's time and today with TALIS, ERHARD remains a strong team.

ERHARD celebrates its 150th anniversary. What began with a small workshop on Wedelgraben has become an international company with 200 employees. ERHARD has experienced many ups and downs, but the constant factor in this history is above all the employees whom the company can always count on.

In our interviews, you will gain exciting insights into how people work at ERHARD, you will be inspired by the commitment of the employees to the company and you can also expect to hear surprising anecdotes about ERHARD which you had never heard before, then and now.

The strong commitment and also the pride of the employees to say: "I work at ERHARD. This is not only something that contemporary witnesses describe with their insights from the past; young ERHARDians, for whom Waldenmaier's times are just old stories, also confirm this impression.

Immerse yourself in the world of the ERHARDians!

Our greatest ambition is the satisfaction of our employees and business partners. At ERHARD, our corporate values are not just written down on paper, but practised on a daily basis. We stand behind and honour our commitments and take initiatives to find creative ways to achieve our business results.

We strive for continuous improvement and have the necessary passion to achieve our goals. We treat everyone with respect and honour, with confidence, openness and honesty, together as a team.

So what connects employees, customers and business partners with ERHARD
and what wishes do they have for the future of the company? 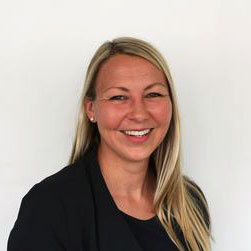 Since I myself had been living in the immediate area of ERHARD for a long time and my father-in-law also worked here, the company is simply part of my life for me as a resident of Heidenheim. I have been working as a receptionist at ERHARD for four years and love the fact that no two days are the same. For me, it is an honour to be the first face that people see here – whether they are customers, visitors or colleagues. 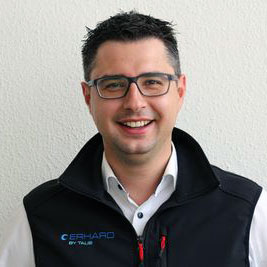 I have felt very connected to ERHARD for a long time, as I already worked in production and assembly during my school holidays, meaning I was able to get to know the products in detail. I have been working full time at the company since 2012 and have been in charge of the service department for six years. Helping our customers solve problems with the help of my know-how is a great pleasure for me every time. A special highlight was the management of the development project for the welded seat on the ROCO Wave butterfly valve, which has been used successfully for years. The special thing for me at ERHARD is the cooperation with my colleagues - the cohesion even in economically difficult phases and above all that young and older employees act as a "family" to achieve the company's goals together. 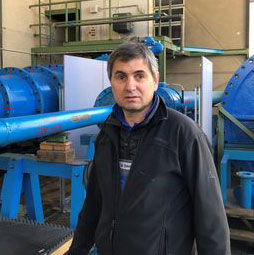 I started working at ERHARD as a fitter in 1990 and moved to the testing department a year later. There I got to know - through my expert colleagues - the valves. After five very interesting and instructive years, I switched to the large-scale test bench and was able to develop further in the drive world. But at some point I was drawn back to the testing department, where I still deal with interesting topics such as the further development and measurement of ERHARD valves. For me, 30 years at ERHARD has been a successful time with very competent colleagues at my side and room for further development under great working conditions. 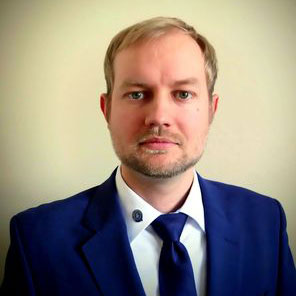 “TechnoGuss has been supplying ERHARD with high-quality cast iron parts for almost 30 years. We thank you for the trusting and cooperative partnership and wish ERHARD all the best for its 150th anniversary and a successful future.” 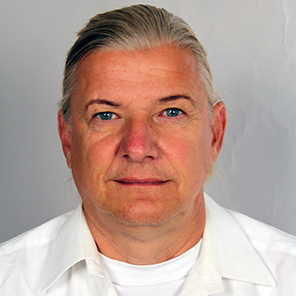 "Whether Johannes Erhard, on his journeys after 1871, also visited the waterworks in Tegel built for the city of Berlin in 1877 and was able to sell his brass water taps there is possible in principle. We no longer know today. What we do know, however, is this: Erhard valves were installed in the newly built Tegel waterworks in 1969. Many of them are still in use today and there are even spare parts for them. As a customer with the Erhard customer number "6", we are pleased about this exemplary sustainability. Happy birthday - dear Erhard company!"

We are working intensively on our anniversary book. In a stylish square format, bound in a high-quality hardcover. By clicking on the button below you can order this unique book for a small contribution towards expenses.  Just click on the button and send us an e-mail. We will be happy to inform you as soon as the book is available.

Special offer:
All Subscribers receive our anniversary book as an eBook version for free!

You have not subscribed to our newsletter yet?
Then sign up here and as soon as our anniversary book is available, you will receive the eBook version free of charge by mail

Are you interested in more details about our 150 years anniversary of ERHARD? Is there a great personal story about ERHARD that has especially remained in your memory? Or a special moment that you associate with ERHARD that you would like to share with us?

We look forward to receiving your message! Do you have more questions or suggestions? Get in contact with us: